Note, before you read this wall of text: this is part one of two. This explains the history behind the current stack, not the current stack we're using. For that, wait for the second post (this post will be updated with a link once available.)

Reddit's codebase, colloquially known as "r2", was (is) a decade- old python monolith. When I started two years ago, my role as frontender was mostly relegated to minor UI tweaks; auto-updating timestamps, admin UI changes, and jQuery upgrades. It was a slower-paced codebase than even the hellscape Rails monolith at Airbnb (which isn't to say that either lacked skilled or thoughtful engineers; it's just the inevitability of the monolith, no matter what some people might argue. Don't blame me, I tried to fix it.)

It has become a common theme, in my experience, that after sufficient time and fustration have been spent working within the confines of a monolithic codebase, an excitable frontend engineer will find opportunity to begin something called a "mobile web redesign". This engineer may say, "hey, our mobile web experience is bad. 50% of our users are on mobile devices! Why don't we do something a little different, a little experimental, and see what it would look like on a virgin codebase? We'll use our current API, and if it goes well, we can port our changes to the main codebase. If it fails, well, it's a separate codebase. We'll timebox it and everything." This conversation will generally involve various levels of product managers, engineering managers, and the occasional executive, who will collectively shrug and accept the "50% of users" value as truth. The trouble is, of course, that there's a whole lot of legacy functionality included in any old codebase, and even more in a monolith where code can be monkeypatched and annotated to the point of total incomprehensibility. Compounded by a complete lack of tests, a plugin system that autoloaded routes, and that the engineering team was less than a half-dozen engineers meant that time was ripe for me to begin the same phyrric path that many others before me had wandered.

These thoughts in mind, in September 2014, I created a new github repository called reddit-mobile, and began the decision of how the hell to build this thing. Reddit has a long history of open-sourceness, so whatever I picked had to be just as friendly; not some flavor-of-the-week framework like Meteor[0] or Angular[1] (see footnotes), but something with longevity. Something that was built for the right reasons, that would remain readable at worst, and current at best, several years into the future. Refactorability and choice were prime priorities, but so was getting work done as a single engineer, and later as a small team.

During my time at Airbnb, over many discussions with the frontend team, we came to a conclusion that made a lot of sense: picking a collection of libraries and building the glue around them as a framework makes more sense than picking a framework and building your application around it. This lets you choose the best library for your application and team's needs; languages, linters, build tools, interface with the rest of your stack, and the team's expertise rarely fits with a large framework that makes the decisions for you. In the case of Reddit, I determined the priorities for our frontend web stack to be:

To accomplish #1, accessibility, we need to render on the server. Some frameworks accomplish this by doing things like running WebKit on the server[0], but that's lazy, doesn't scale well, and is slow. Some frameworks require you to write in a template language for the back-end, and then either re-implement the templates in javascript for the client or write jQuery spaghetti code for event management and UI updates. However, if we pick a template language that can be rendered on the server and client the same way- template + data = html- we're in a good place. Our next goal, a great user experience, involves interactivity. This is accomplished with some kind of UI updating toolkit, which could be take dozens of forms; jQuery spaghetti, Backbone, Angular, Polymer, and more. As it happens, it was around this time that React was getting popular. The current codebase had some Backbone (still does; live threads, for example), but a lot of new code was being written using React (Reddit Gifts and ad management tools.) To accomodate the third priority- developer productivity- it made sense to use what the other frontend devs were interested in, as long as it promoted the other goals as well. It turns out that it's pretty easy to render React on the server, and React is perfect for building a highly responsive UI, so the choice was made pretty easily. The server-side decision was just as easy; if we could render React in node, then we don't have to write viewmodel, API, or other miscellaneous library code in two languages. We'd also use ES7+; Babel (then 6to5) was becoming a solid way to transform bleeding-edge javascript [standards | vague suggestions] into code the browser could run, so we could get the benefits of syntax sugar (classes! generators! async/await!) without having to use a non-javascript langauge, again lowering the barrier to entry and futureproofing the codebase.

To understand how to get all of these pieces working together, I took a look at how requests were made on the server-side and client-side.

The server and client aren't that different - the only glue code necessary is:

I designed horse[2] and a react-specific subclass, horse-react[2] as the middle layer, which looks something like:

I also built an API library, snoode[3] to make dealing with Reddit's unique api design easy, feet[4] for feature flags (turn X on if you're an employee, or turn Y on if there's a querystring flag), and restcache[5] to handle the caching of REST-like API responses.

With this done, building new pages that rendered server-side and client side looked like:

This worked for quite some time, and it was very straightforward to add pages. However, as the team and app grew, we noticed a few areas where things got a little messy. It was never clear how best to handle interactions, and especially interactions that took place across components. You could use one of a couple methods, two of which we used heavily:

In either of these cases, you're required to pass in API information, such as your current token, from the top-level all the way through to whichever component actually makes the API call. This gets even more complicated when you have to start pausing API requests when refreshing your OAuth token. Eventually, things got to where we couldn't answer the question of handling intra-component interactivity without taking a second look at how our framework was designed.

Stand by for Part II, whereupon I discuss our use of Redux to solve these issues.

[0] since I began this post, Meteor switched to rendering React and Angular directly on the server, rather than either no server-side rendering or spinning up a WebKit project, and is thus no longer a Poor Choice.

[1] I've always dislked Angular because it shoves a ton of magic into the template layer, and you don't have any visibility into what's going on. I dislike Magic.

[2] Horse is now deprecated, in favor of node-platform.

[4] Feet is now found at node-flags

[5] Restcache is now defunct, replaced by a Redux store.

I finally got around to creating a public key, after Github announced signature support. It's something I've been meaning to set up for a while (as a curiosity more than as a threat mitigation strategy). 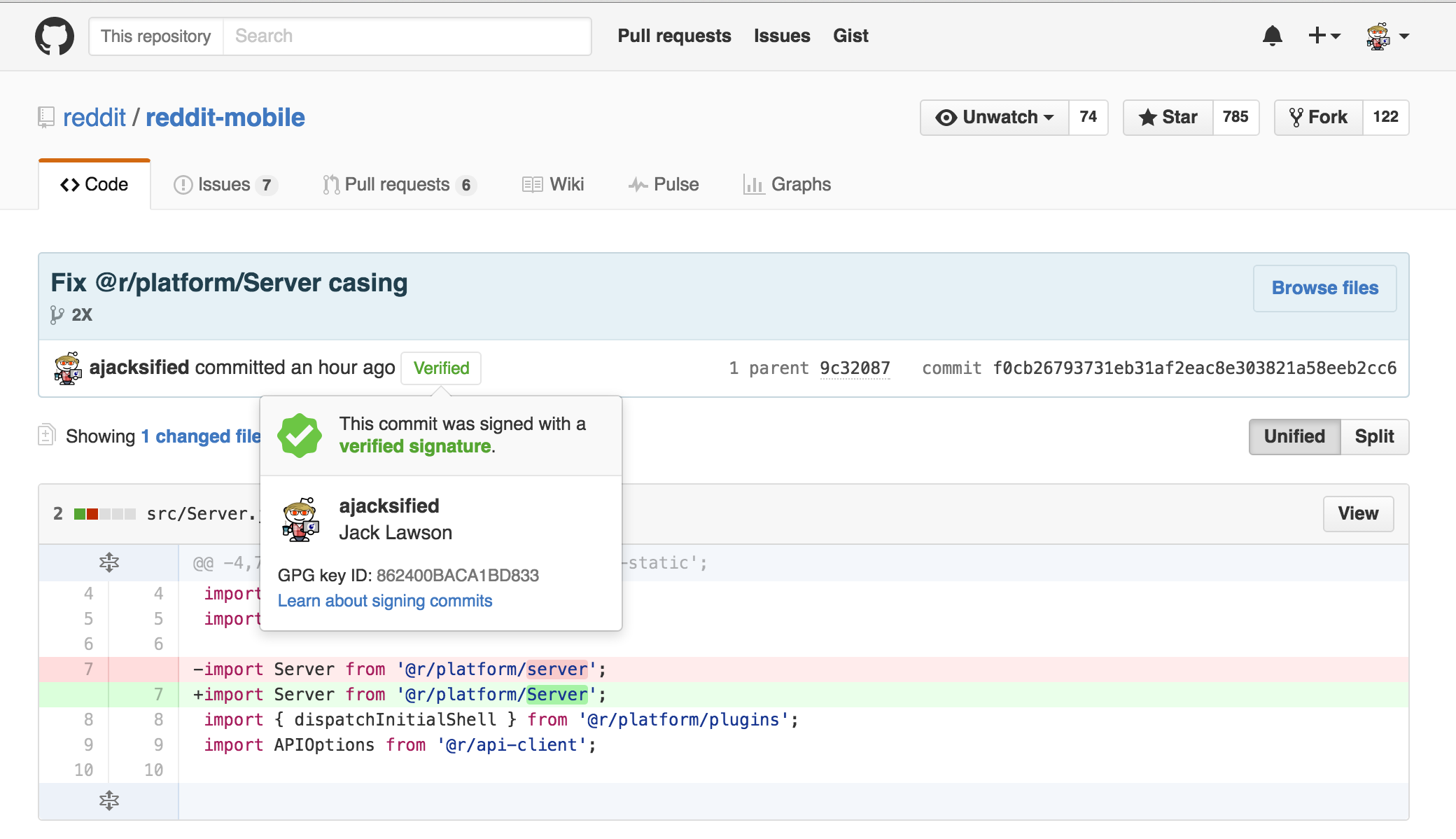 What I wanted was to automatically sign git commits (without too much hassle), and an easy way to send encrypted messages, such as shared passwords, with coworkers. It wasn't hard at all, although the information wasn't all in one place; here's what I did:

Finally, and optionally, you can update your git config to add signing by default. First, get your uid from gpg --list-keys | grep uid which should return something like:

You can put this uid in your gitconfig:

Along with a line that tells git to automatically sign commits:

And, henceforth, all of your commits shall be signed, and you too can have that beautiful, green [verified] badge.

Sidenote: I've started using keybase.io for utilities like easily encrypting and verifying data with other users, and to generate messages to verify my signature on Twitter, GitHub, this blog, and the like.

Lately, I've been sliding back into the habit of working late at night (or, at least, certainly intending to.) However, a break between leaving work and the late night makes it somwhat difficult to get back into the swing of things.

I find it often helps to build a simple, useless, weird project before getting started to help get my mind in the right place. Some of my most recent projects are:

It's a weird bag of clever and overengineered CSS that gives you something that vaguely resembles what you might remember working on an old, gaussed CRT looked like. You can type wat over and over. It also served to teach me about some of the weirder corners of the latest CSS specs, like webkit-mask-image - I'm particularly proud of how I got the corners, and only the corners, to blur on the "screen". (And using a radial gradient at that.)

I also used that as inspiration for my latest blog design. Not sure if it'll stick or not, but here's trying. The color scheme is based on Andrea Leopardi's Gotham and I implemented it while listening to a lot of Com Truise.

I took a listing from /usr/share/dict/words, then grepped it to find what words had [0-9a-f] along with some letters I could translate (l = 1, z = 2, etc.) I then took that and built a big page of all the colors. It made me realize how long it's been since I actually did manual DOM manipulation without fifteen layers of libraries abstracting things away. I'm, manually creatig document fragments and stuff. it's crazy. At one point I even wrote my own new XMLHttpRequest() before I moved the colors array into the same file for performance.

Anyway, I hope someone gets a chuckle, or at least exhales sharply out of their nostrils. It was fun. Now, back to work.

I gave this presentation at Akamai's Edge conference and NewRelic's FutureStack (with slight differences); it's about what tools I use to measure the impact of web performance work I do.

The slides are built in Reveal.js, and are available at /performance-tooling (github)

I shared a presentation at our engineering meeting this past Friday (at Airbnb) whereupon I discussed how to write clean, fast javascript tests. One can almost always write good tests and achieve high test coverage by simply using unit tests and stubbing out DOM APIs. That isn't to say that browser-based tests aren't useful; it's to say that you can get a great testing ecosystem running without complicated setup. Mocha will also, neatly, allow you to go ahead and run all of these specs within browsers anyway, so if you do find it advantageous, you have that option open to you.

I also threw in a couple slides about how you can use Browserify (or really, any kind of CommonJS-style module system, like require.js) to write all of your code as modules to make both testing and browser asset compilation awesome.

Hopefully the slides are clear without too much explanation or notes, but if they're obtuse, feel free to contact me and I'll add appropriate notes. The slides are built in Reveal.js, and are available at /javascript-testing. (github)