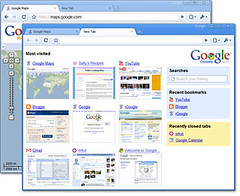 It's so much better than FireFox. Don't get me wrong- FireFox is great- but it's just not Chrome.  I recently caught myself in the act of groaning when I had to open up FireFox just so that I could run (the absolutely FANTASTIC) FireBug, the same way that a year ago I groaned when I had to open up IE for testing. It just takes so long to boot, and in those eight seconds, I could have opened Chrome a dozen times. I'm writing this post in FireFox because it has Zemanta, not because I want to.

It's strange when a browser that I fought against, and then fought for, fell so quickly when Google threw it's weight into the arena. I was crazy about FireFox; every day I extolled its merits to coworkers, to family, to strangers who happened to glance my way. I do the same thing now, but haltingly, with a line like  "but if you really want to see something fast check this out," as I load up Chrome.

Oh, come quickly, Chrome extensions, and may I banish FireFox to the realm of "browsers to load when testing". FireFox, it was great while it lasted. Maybe someday.